An idea from the pre-Brenner years 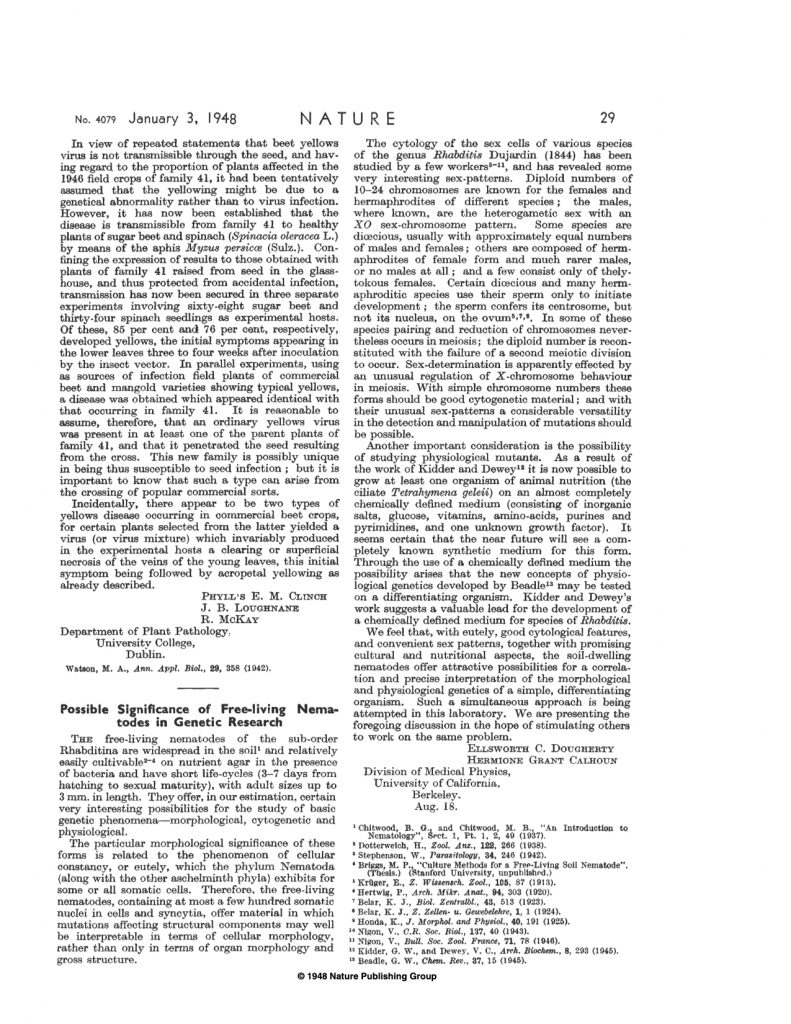 “In late 1962, Francis Crick and I began a long series of conversations about the next steps to be taken in our research. Both of us felt very strongly that most of the classical problems of molecular biology had been solved and that the future lay in tackling more complex biological problems. I remember that we decided against working on animal viruses, on the structure of ribosomes, on membranes, and other similar trivial problems in molecular biology. I had come to believe that most of molecular biology had become inevitable and that, as I put it in a draft paper, “we must move on to other problems of biology which are new, mysterious and exciting. Broadly speaking, the fields which we should now enter are development and the nervous system.” At that time, there were extensive discussions with the Medical Research Council on building an extension to the Laboratory, and Max Perutz, the head of our laboratory, had been exploring the ground with the Council. I have recently found the correspondence on this topic, and in a letter dated 5 June, 1963 (see below), I wrote to Max and explained my views to him. Nematodes have not yet made their appearance, because I had only just started to read about them and had not yet formulated any ideas. Some people thought that our approach was too “biological” and would lead us away from molecular biology, but, in any event, we were asked to make a formal proposal, and a document was accordingly submitted to the Council in October, 1963. During the summer I had formulated my ideas, and as you will see from the document and the Appendix referred to, the now familiar lines of the project had emerged. Note that the paper refers to C. briggsae; it was some time before C. elegans was selected in preference.
I hope readers will enjoy the last, brief paragraph of the Appendix. They should understand that it has expanded into the contents of this book, and achieving it has taken more than 20 years and the labors of a large number of people.”

These notes record and extend our discussions on the possible expansion of research activities in the Molecular Biology Laboratory.

First, some general remarks. It is now widely realized that nearly all the “classical” problems of molecular biology have either been solved or will be solved in the next decade. The entry of large numbers of American and other biochemists into the field will ensure that all the chemical details of replication and transcription will be elucidated. Because of this, I have long felt that the future of molecular biology lies in the extension of research to other fields of biology, notably development and the nervous system. This is not an original thought because, as you well know, many other molecular biologists are thinking in the same way. The great difficulty about these fields is that the nature of the problem has not yet been clearly defined, and hence the right experimental approach is not known. There is a lot of talk about control mechanisms, and very little more than that.

It seems to me that, both in development and in the nervous system, one of the serious problems is our inability to define unitary steps of any given process. Molecular biology succeeded in its analysis of genetic mechanisms partly because geneticists had generated the idea of one gene-one enzyme, and the apparently complicated expressions of genes in terms of eye color, wing length and so on could be reduced to simple units which were capable of being analyzed. Molecular biology succeeded also because there were simple model systems such as phages which exhibited all the essential features of higher organisms so far as replication and expression of the genetic material were concerned, and which simplified the experimental work considerably. And, of course, there were the central ideas about DNA and protein structure.

In the study of development and the nervous system, there is nothing approaching these ideas at the present time. It is possible that the repressor/operator theory of Jacob and Monod will be the central clue, but there is not very much to suggest that this is so, at least in its simple form. There may well be insufficient information of the right kind to generate a central idea, and what we may require at the present is experimentation into these problems.

The experimental approach I would like to follow is to attempt to define the unitary steps of development using the techniques of genetic analysis. At present, we are producing and analyzing conditional lethal mutants of bacteria. These are mutants which are unable to grow at 44C but do grow normally at 37C. The mutations affect genes controlling the more sophisticated processes of the bacterial cell, and some work which we have already done indicates that it will be possible to dissect the process of cell division into its unitary steps. We have mutants in which neither a cell membrane septum nor a cell wall is made, others in which a septum is made but not a cell wall septum and so on. We have mutants in which the control of DNA replication is affected. I intend to expand this research activity in the near future.

Our success with bacteria has suggested to me that we could use the same approach to study the specification and control of more complex processes in cells of higher organisms. As a first stage, I would like to initiate studies into the control of cell division in higher cells, in particular to try to find out what determines meiosis and mitosis. In this work there is a great need to “microbiologize” the material so that one can handle the cells as one handles bacteria and viruses. Hence, like in the case of replication and transcription, one wants a model system. For cell division, in particular meiosis, the ciliates seem the likely candidates. Already, in these cells, the basic plan of meiosis is present and there is no doubt that the controlling elements must be the same in ciliates as they are in the oocytes of mammals.

Another possibility is to study the control of flagellation and ciliation. This again is a differentiation in higher cells and its control must resemble the control in amoebo-flagellates.

As a more long term possibility, I would like to tame a small metazoan organism to study development directly. My ideas on this are still fluid and I cannot specify this in greater detail at the present time.

As an even more long term project, I would like to explore the possibilities of studying the development of the nervous system using insects…

Excerpts from Proposal to the Medical Research Council, October, 1963

In summary, it is probably true to say that no major discovery comparable in importance to that of, say, messenger RNA, now lies ahead in this field, but the detailed elucidation of the mechanisms already discovered is nevertheless vital.The new major problem in molecular biology is the genetics and biochemistry of control mechanisms in cellular development. We propose to start work in this field and gradually make it the Division’s main research.

In the first place, control mechanisms can be studied most easily in micro-organisms, and this work has already begun. In addition we should like to start exploratory work on one of two model systems. We have in mind small metazoa, chosen because they would be suitable for rapid genetic and biochemical analysis. Proposals for such work, which we plan to begin within the next few months, are set out in Appendix I.

APPENDIX I
Differentiation in a Nematode Worm

Part of the success of molecular genetics was due to the use of extremely simple organisms which could be handled in large numbers: bacteria and bacterial viruses. The processes of genetic replication and transcription, of genetic recombination and mutagenesis, and the synthesis of enzymes could be studied there in their most elementary form, and, having once been discovered, their applicability to the higher forms of life could be tested afterwards. We should like to attack the problem of cellular development in a similar fashion, choosing the simplest possible differentiated organism and subjecting it to the analytical methods of microbial genetics.Thus we want a multicellular organism which has a short life cycle, can be easily cultivated, and is small enough to be handled in large numbers, like a micro-organism. It should have relatively few cells, so that exhaustive studies of lineage and patterns can be made, and should be amenable to genetic analysis.

We think we have a good candidate in the form of a small nematode worm, Caenorhabditis briggsae, which has the following properties. It is a self-fertilizing hermaphrodite, and sexual propagation is therefore independent of population size. Males are also found (0.1%), which can fertilize the hermaphrodites, allowing stocks to be constructed by genetic crosses. Each worm lays up to 200 eggs which hatch in buffer in twelve hours, producing larvae 80 microns in length. These larvae grow to a length of 1 mm in three and a half days, and reach sexual maturity. However, there is no increase in cell number, only in cell mass. The number of nuclei becomes constant at a late stage in development, and divisions occur only in the germ line. Although the total number of cells is only about a thousand, the organism is differentiated and has an epidermis, intestine, excretory system, nerve and muscle cells. Reports in the literature describe the approximate number of cells as follows: 200 cells in the gut, 200 epidermal cells, 60 muscle cells, 200 nerve cells. The organism normally feeds on bacteria, but can also be grown in large quantities in liver extract broth. It has not yet been grown in a defined synthetic medium.

To start with we propose to identify every cell in the worm and trace lineages. We shall also investigate the constancy of development and study its control by looking for mutants.

(from the CSHL Archives Repository) The beginning of connectomics: a commentary on White et al. (1986) ‘The structure of the nervous system of the nematode Caenorhabditis elegans’  Emmons SW, Phil. Trans. Royal Soc. London. Series B 370: 1-11 March 2014

An interview with Sydney Brenner

On the shoulders of worms Rhiannon Macrae, Trends in Genetics November 2014

Ramón y Cajal: a century after the publication of his masterpiece. Pedro J. Andres-Barquin, Endeavour Vol. 25(1) 2001

A historical reflection of the contributions of Cajal and Golgi to the foundations of neuroscience. De Carlos JA, Borrell J. , Brain Res Rev. 2007 Aug;55(1):8-16.

Cajal and the discovery of a new artistic world: The neuronal forest. Javier DeFelipe, Progress in Brain Research, Volume 203 2013

The death of Cajal and the end of scientific romanticism and individualism. Javier DeFelipe, Eduardo Garrido, and Henry Markram, Trends in Neurosciences, October 2014, Vol. 37, No. 10

The Nobel Prize in Physiology or Medicine 2002

The Nobel Prize in Physiology or Medicine 2006

The Nobel Prize in Chemistry 2008